A Saskatoon mom, Kath Stevenson, wrote this brilliant piece lately and it’s worth spreading to all who teach, mentor, model, live, work and play with people who have disabilities. It would be absurd for a teacher to say “I have 35 students and one Downs in my class…” yet we’ve heard it. It would be just as dehumanizing for a doctor to say, “The patient is kidney” or “he’s dementia” as it is for her to say, “The patient is Downs.”But we’ve heard that, too. When taking a friend back to a group home after a visit, wouldn’t it be demeaning for a staff to say, “Doesn’t matter, park him anywhere. He’s Downs…” Yep, that one, too. Even our son Jim, at 42, gets called Jimmy and we’ve been told he’s “a nice boy, but they’re all so happy, aren’t they?” But then along comes a bright and shining parent like Kath who lays it out like this:

“To all who teach, mentor, or role model health professional students, please take note: Hugo is not Down syndrome or Down’s, i.e. “Since he’s Down’s….”, he certainly has DS, but it is not who he is. Similarly, Hugo is not a ‘Down’s baby’ or a ‘Down syndrome kid.’ When health professionals talk this way, my spidey senses tingle and I no longer trust that you see my whole child. Also, while I appreciate Hugo is damn cute, it isn’t Down syndrome that makes him so, as today’s nurse implied when informing me that they “had so many Down’s kids today” and that makes her happy since “Down’s babies and kids are always so cute, no matter how old.”  Just no. Positive stereotypes are still stereotypes and they hold people back. I want you – I need you – to see my whole son and not a diagnosis and if health professionals can’t rise to the occasion, I’m not sure who can.”

You go, Hugo’s mom. With parents like Kath Stevenson and Ray Romanski, Hugo won’t ever be one of the dismissed ‘others.’ Just like Kath says, our son Jim has Down syndrome, it’s not who or what he is. And don’t call him cute; at 42, the adjective is handsome. We agree, Hugo is cute! And he rocks a rad haircut. But, everybody pay attention: as he becomes a man, don’t forget to treat him like one.

Hey! The fall issue of Saskatoon HOME is out and it’s early! I think I say this about every issue, but this is one of my favourites. One of my pet stories is the piece about fine bone china. I learned a lot. Did you know that they call it bone china because it really does contain bone? Cow bone. What’s more, there’s some guy in Seattle who will make a lovely set of dishes for you using your loved one’s ashes. That way, you can have your family member over for dinner every night. For this story, we visited Don Penn of Penn’s Antiques, and also Roger and Chris out at Solar Gardens. Check out Roger’s vast collection, beautifully displayed in the dining room. That’s me and Roger, me trying not to break anything! Get your issue to bone up on china knowledge, and there’s plenty of other interesting stuff, too.

The content for each issue of Saskatoon HOME magazine is determined by a panel of readers, locals who love reading about what makes Saskatoon a great place to live. This gem, Kathy Diederichs, was featured in our summer issue. We don’t promise that you’ll become a local celebrity (and you don’t have to put on a suit either!), but we will be very appreciative. And you might get taken out for coffee (or a London Fog). If you’d like to be a member of this esteemed panel, click here or email info@saskatoon-home.ca with Reader Panel in the subject line. 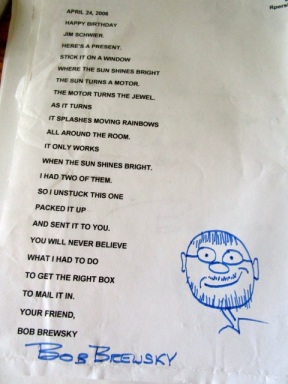 We’ve been collecting our Bob Perske memorabilia today, and reliving lovely memories. We’re happy to have an original Perske cartoon, and we found an envelope that Jim received and put away in his ‘special stuff’ drawer. It gave Jim permission to stand up for himself when people didn’t treat him right; Bob’s small ‘Be Kind’ strategy is one we’ll make sure Jim puts into practice. Bob emailed later and said he was just joking about Rick ever being mean! ha Here’s another letter with a self portrait, and a photo of Bob and Jim doing speech homework at the dining room table.

Nearly 35 years ago, I met a man who influenced me immeasurably. My writing today would not be the same without his guidance and example. Robert Perske, advocate, author, decent human being, wrote about the value people with disabilities bring to their families and to communities. I read his books and wrote to him. He wrote back. He read my stuff. For some reason, he took to me and we began a lovely relationship. He was a steadfast pen pal with our son Jim for years; Jim always called him Bob Brewsky, and Bob always got a kick out of that. In one of the most recent letters, Bob talked about “being down but not out,” promising Jim he’d write again soon. He was on Jim’s regular update list, and often sent lovely notes about Jim’s full, rich life, sharing jokes and funny links, goofy gifts and always a big dose of positive. We saved everything, each a pearl about what a good life can be for someone who is respected and loved. Bob died August 14th at home, in Darien, Connecticut. He was 88.

Not long ago, Bob wrote a piece about my latest book, Flourish: People with Disabilities Living Life with Passion.

“Flourish is bold and cocky and picturesque and very much up front. I am moving from vignette to vignette slowly and trying to stop and reflect on each person before taking on the next one. As usual your writing is so clear and active and so very much the Karin I always knew and loved in the past. And Jim! You do so very much to help that sweet guy be his sparkling best. I wonder what Jim would be like if he never had his wonderful cast of family and friends.”

He was always a gentle critic and wonderful cheerleader. Bob came to visit us in Saskatoon in the middle of a frigid winter several years ago, and I was given an extraordinary gift. This smiling, generous man arrived at the airport at midnight, February 29th – a leap year – taking a leap of faith on me. He emerged through Customs with a Sports Authority hockey bag, freshly ripped open at one end courtesty of the airlines, out of the hole was a glimpse of what was just the tip of the iceberg that is Robert Perske’s collected works. Now my collected works, hand delivered for safe keeping, all the way from Darien, Connecticut, by this man who thought I might do something worthwhile with them. Rick, Jim, Bob and I spent the next several days laughing, telling stories, eating – Rick tried to kill him one evening by cooking up a wonderful batch of carne adovada with the wrong sort of chilis – but we ate it through tears, drinking wine, and telling more stories. We went for bracing walks bundled up at -20. Jim and Bob would get up early and just sit with each other, petting the cat, no need for words. We were family.

We began a book together, and during those days he spent with us, I made nearly 20 recordings of his stories and observations. Over the next while, we got a lot done on that book. But it wasn’t time for his memoirs. He was heart-deep in trying to exonerate a man with a disability, Richard Lapointe, whom he was absolutely convinced had been unjustly imprisoned for a murder he did not commit. Richard was ultimately released from prison just recently, so Bob lived to see that happen. It wasn’t exactly what he’d hoped for, but at least Richard got out and hopefully, as a free man, he will have that seafood dinner they often talked about.

This is one of Bob’s last notes to Jim. Jim always liked to read letters from Bob. They were plain, honest, made sense, and were full of love.

But you are a good guy.

In them you are smiling.

Now I have stopped work..

I will have time to write you again.

Can I write you?

You are a good man.

You are a happy man.

You do good work.

I am proud to know you.

Bob, we are proud to have known you, too. Our best wishes to Martha and the family. We are feeling a little at a loss tonight, but blessed at the same time. Martha says there will be no funeral, and Bob continues to give. He donated his body to the Yale School of Medicine, and I’m sure he’s chuckling about getting into Yale as a mature student. Memorial donations can be made to Communitas, Box 358, Manchester, CT, 06040. 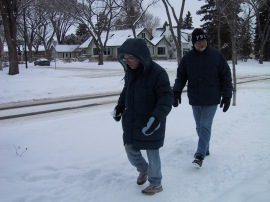 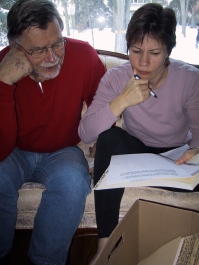 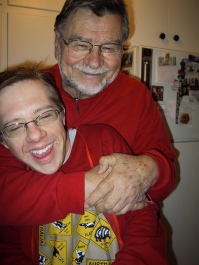