I do a lot of magazine writing. There’s always something interesting to find in any assignment but now and then one comes along that is fun with a capital FUN.

Last week I was asked to do the cover feature for both the Regina and Saskatoon issues of Fine Lifestyles magazine. The cover boy? Kim Coates, film, stage and TV star with over 50 roles and blockbuster movies on his resume and, even better, Coatsie is a Saskatoon boy. Mom and brothers Dale and Dean are here, so when Kim got a short hiatus from shooting the fifth season of the hit FX cable series Sons of Anarchy–he plays scary guy Tig Trager–he headed home. There was golfing with his old buddies and of course spending time with his mom, and he also worked in visits to the U of S. As an alumnus of the drama department, Kim spent some time guest teaching, and participated in the inaugural event of the film/discussion series Saskatchewan: We Make Good Films at the Broadway Theatre. By the way, this is a series you really should take in.

Just before Kim came home, we spent several hours together on the phone, first doing an interview just after his run in Eaton Canyon near his house in Pasadena. Then, in between long days on the SoA set, we talked again a couple of times, hashing over the material. He spoke passionately about his family, his friends both in Hollywood and here at home, about his career and getting his start at the U of S. He is a huge fan of the Drama Department, and is a solid cheerleader for the Clarion Project which will propell the arts into greater significance at this campus.

I have to agree with everyone I talked to as I put this piece together; Kim is a great guy. Genuine, down to earth, funny and passionate. He was hugely generous with his time for me and not once did he come across as a “movie star.” His childhood buddy, Saskatoon City Manager Murray Totland (they met when Kim was 4 and Murray was 5), told me, “There are two Kims: the Hollywood Kim, and there’s Coatsie from childhood, the really genuine down–to-earth guy I know and love. It would have been easy to forget about all of us back here and get caught up with his phenomenal success. But he still cares deeply about Saskatoon, what’s going on in the community and the university.”

My husband, son and I went to the Broadway on Wednesday night to say hi and collect my promised hug. Who could turn down an offer like that? Besides, have you seen Tig Trager? Who would say no to that guy? Be sure to pick up the fall issue of Fine Lifestyles out soon or go online. Scroll down to that nice looking young man on the cover, click and enjoy. 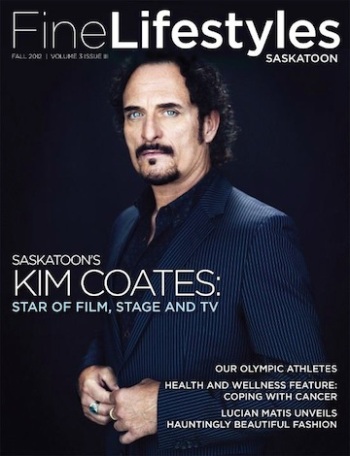 It was 1977. I was working at the Fairview Post, a small weekly newspaper in northern Alberta. While finishing high school, I started with the paper in grade 11. An earlier stint at the IGA grocery store was fun and customers liked me (second place for the town’s Annual Most Congenial Clerk Award) but given that I could never balance my till, my ever-optimistic boss Joe Dobrich took me to the paper to ask for a job on my behalf. With no change-making skills required, my writing career was born.

Fairview’s new hospital complex opened that November and Premier Peter Lougheed was there to cut the ribbon. I got assigned to the interview. I was 18 and terrified and I don’t know what the editor could have been thinking.

It was my first big interview with someone “famous” and my heart was in my throat as I knocked on the hotel room door. Yep, an interview with the Premier in his hotel room. Like I said, it was 1977. His aid ushered me in and I remember thinking that Mr. Lougheed, a small man, had a big beautiful smile. He took my hands, seated me on the edge of the bed and chatted for a few minutes about how pretty the town was, how happy he was to be visiting. He asked about me and was pleased to hear I grew up on a farm. I’m sure he saw how nervous I was, clutching my note book with my well-rehearsed list of 4 questions. He was gracious, took my faltering attempts an the interview in stride and made me feel like each question was intelligent and insightful. We talked for probably 20 minutes and he thanked me warmly when it was over. He invited me to call his secretary and whenever I could make the trip, he said he would like to give me a tour of the Alberta Legislature. I never did. I wish I had.

Premier Lougheed died last week. Now he lies in state at the legislature in a flag-draped coffin as mourners pay their respects. People all over the country were calling in to CBC’s Cross Country Checkup to talk about a man who, even if they did not agree politically, was always a gentleman. He treated everyone with respect and good manners, just as he did with a fumbling nervous 18-year-old on her first big assignment. Thank you, sir.