Don’t know if it’s a coincidence, maybe it’s just that time of year, but Canada Post just issued a second series of stamps called Haunted Canada. It features several of “our country’s most popular ghostly tales.” I thought one looked eerily familiar. The Caribou Hotel in Carcross, Yukon is said to be hauted by the ghosts of the Klondike Gold Rush. No wonder I recognized the hotel; I have the Ted Harrison print hanging right over my office desk. It’s where I once received a quarter in the 1960s when a tourist rounded up a bunch of kids, me included, so she could take a picture of “Indian children” by the hotel. I was with my parents on the White Pass and Yukon Railway train, and we were stopping at the hotel for moose and bannock. I don’t remember “feeling the chill” of any ghosts as Canada Post suggets, but I do feel a little creepy every time I look up from my computer now. 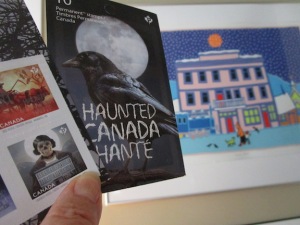 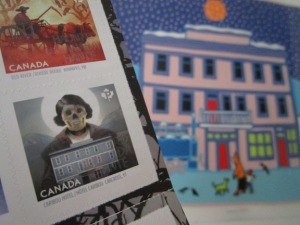 When my writer pal Lisa Bendall suggested I get in touch with Louise Kinross, a parent who runs a blog for the Holland Bloorview kids’ rehabilitation hospital, I did. I trust Lisa to know good people. Sure enough, Louise is pretty cool.  Louise and I had some emails exchanges and she asked me to contribute to BLOOM, the blog she manages for parents and others interested in the lives of kids with disabilities. She asked me to write about the motivation behind my last book, Flourish: People with Disabilities Living Life with Passion. have a look. See if you can spot the potbellied pig! 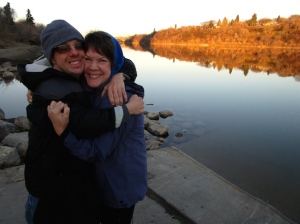 Jim’s dad took this picture of Jim and me  at the riverbank during a beautiful late fall sunset, downtown Saskatoon. 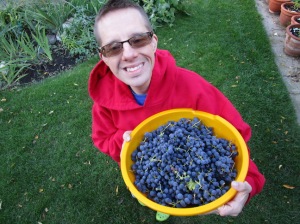 A little earlier in the season, our stellar grape harvest from our backyard vines. 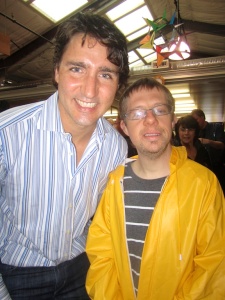 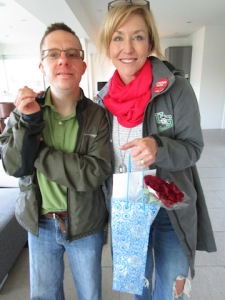 It was bound to happen after Jim and Justin had a chat at the Farmers’ Market. Then Jim delivered good luck wishes our neighbour and Liberal candidate Cynthia Block on Sunday. Cynthia didn’t make it in our riding, despite all her hard work, and Jim’s flowers and jam, but we have another Trudeau as the 23rd prime minister of Canada. Jim’s waiting for the call to fill a portfolio. 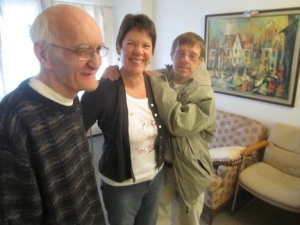 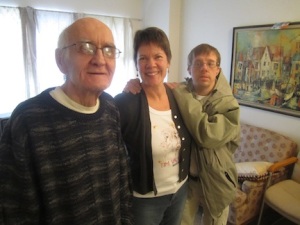 Back in the early 80’s, I met Neil Mercer. He had lived for 13 years in an institution (“unlucky 13,” he always said) and was probably the first person I’d ever known who had been in an institution for people with disabilities. He was always my touchstone about what happens when people are warehoused, segregated and “treated like they don’t know anything and people take away any right to thinking.” Neil always spoke plainly about his experiences, his life, what he hoped – what he knew – people with disabilities could accomplish. He never shied away from telling his story, and was proud to have a chapter in my first book about people with disabilities, Speakeasy: People with Mental Handicaps Talk About Their Lives in Institutions and in the Community (Pro-Ed, 1990).  It was an unwieldy title, but Neil liked it. “We have to talk about what our lives were like in there and what our lives are like out of that place so people don’t do that crap any more.” His stories about the inhumanity that played out in a multitude of daily minutiae were powerful lessons about segregation. If anyone ever felt a bit ambiguous about inclusion, all that was necessary was a cup of coffee and a good talk with Neil. His fondest dream was that Valley View Centre – he never called it ‘home’ – would close. “Burning it to the ground” would have been okay by him. When closure was finally announced in 2012, Rick, Jim and I went to visit Neil at his downtown Saskatoon apartment. His health hadn’t been good for awhile and his eyesight wasn’t so hot, but he always had a big smile and that dry sense of humour. “Jim should be happy (that Valley View is closing),” he said. “You won’t ever have to be scared someone will take him away and put him there because ‘that’s where all those people are supposed to be.’ Where we’re supposed to be is right where he is.”

Neil died on Friday, October 2nd. He was a very good teacher, a dedicated change agent, and a decent man.

Despite some frost and nature’s reminder to go dig out the mitts and boots, we’re having a balmy reprieve this week, 21C on Saturday! Shorts and t-shirt weather just in time to pull the sheets off the flower and vegetable gardens, harvest those beets and carrots, and drink in the last of the autumn colours. Our ‘to do’ list include some outdoor painting, digging potatoes and root veg, and eating as much swiss chard and beet leaves as is humanly possible over the next few days! Maybe even one or two last movies on the back deck with a chimenea fire and a marshmallow or two. 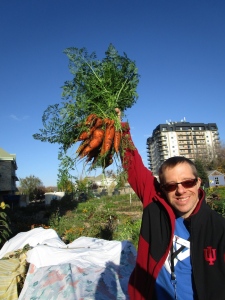 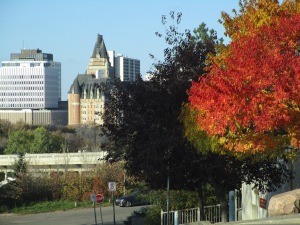